Menu
Get a quote

Proud Holder of a Master in Translation

Just a quick message to let you know that no, my face has not changed (it is just getting older), but I now hold a Master in Translation, which kept me busy this last year or so and should allow me to deliver even better quality work to my clients.

I should be able to publish again new insightful blog posts on a regular basis.

Write to you soon!

Financial Health of LSPs in the UK 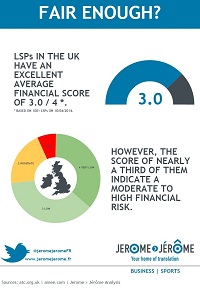 Nearly a third of LSPs in the UK have a financial score indicating a moderate to high risk.

What does it mean for the translation industry in the UK?

As an LSP, do you assess the financial health of your competitors?

As a translator, do you assess the financial health of an agency before working with it? If yes, how do you do it? Would you accept to work with an agency with a poor financial score?

Financial Health of LSPs in the UK bit.ly/JJFHLU #xl8 #t9n

Nearly a third of LSPs in the UK have a poor financial score bit.ly/JJFHLU #xl8 #t9n

Should you worry about the financial health of LSPs in the UK? bit.ly/JJFHLU #xl8 #t9n 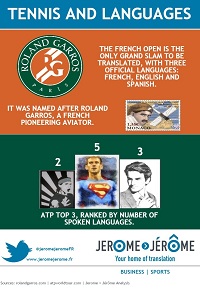 Why is the French Open, named after Roland Garros, a French pioneering aviator, so special? First of all, it is the only Grand Slam tournament played in a non-English-speaking country. As such, it is the only one to be translated, with three official languages: French, English and Spanish.

Besides, it is also the only Grand Slam tournament played on clay, and learning to play on this surface seems to be as big a challenge as learning another language for tennis players, especially for native English speakers. No wonder that the only American man to win this title more than once in the last 50 years, Jim Courier, learnt to speak French.

Nowadays, rare are the American players, men or women alike, able to speak another language. Serena Williams is an exception: she can speak Spanish and some Italian. Moreover, she has been working on her French and is the lucky owner of an apartment in Paris, where she trains at the Mouratoglou Academy.

Andy Murray, the only British player in the ATP Top 100, is not able to converse in different languages, although he lived in Spain for two years.

Spanish, just like English, is another major language. Consequently, Spaniards have less incentive to learn a second language. If we have a look at the Top 5, Rafael Nadal and David Ferrer are not really known for their language skills, even though Nadal showed some signs of improvement during his speech after his 2014 French Open victory.

On the other hand, two Swiss players are among the Top 5: Roger Federer and Stanislas Wawrinka. Federer can give his post-match press conferences in English, French, and Swiss German, and has some knowledge of Swedish and Italian. Wawrinka is also a polyglot, as he speaks five languages: French, German, English, Czech, and Italian. Switzerland is a multilingual country, which makes it definitely easier for its citizens to acquire language skills.

Last but not least, Novak Djokovic, the world number 1, speaks Serbian, English, German, Italian, and French, and considers himself as a language lover. Coming from Serbia, he has been well aware that Serbian is a minor language, which also encouraged him to learn new languages. He has made fast progress especially on his French since moving to Monaco, and he recently won the crowd over when he delivered a speech in French.

According to Djokovic, there is a Serbian saying which states that the more languages you know, [the] more is your worth as a person. But how much is your company worth on the international scene in terms of linguistic skills?

Just as Roland Garros became the first man to fly a plane over the Mediterranean Sea a century ago, I believe your company could fly over its competition by speaking the language of its audience.

The #FrenchOpen is the only Grand Slam to be translated bit.ly/JJTLRG #ATP #tennis #xl8 #t9n 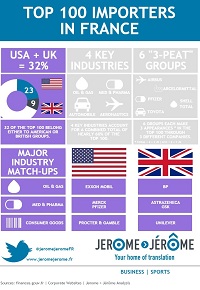 Here is the full list of the top 100 importers in France in 2012 (or the top 75 unique groups, including a joint-venture between Ineos Group Ltd and PetroChina), with the following criteria: rank, COMPANY, parent company, industry, HQ location. 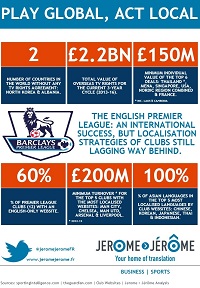 With £2.2bn generated by overseas TV rights, the English Premier League (EPL) is a clear international success. However, EPL clubs still need to implement relevant localisation strategies, in order to reach a wider audience and maximise the corresponding economic benefits. 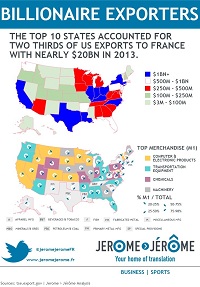 Following two previous posts about US trade in goods then services, this article deals with the state-by-state breakdown of US exports to France. It is the third instalment of “French Connection”, a series exploring English to French flows in terms of trade, finance and people.

Language Skills Are Not GREAT Britain 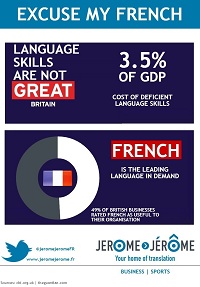 Following a previous blog post about the insufficient English skills of French executives, I have decided to cross the Channel this time around, in order to explore the French skills of our beloved neighbours. Unfortunately, in spite of 20 years of Chunnel, the UK still has to bridge the French gap. 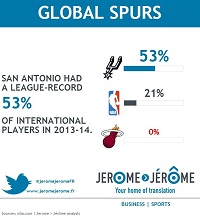 Following their recent victory over Miami, San Antonio is the NBA champion. However, in sharp contrast with the 100% American Heat, the Spurs are true global champions, with a roster including a league-record 60% of players born outside the continental United States. 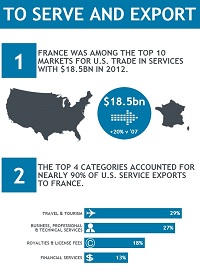 While several initiatives should further improve market access in the EU, such as a potential TTIP, the Trade in Services Agreement (TiSA), and the new Services Trade Restrictiveness Index (STRI) recently launched by OECD, companies of all sizes should benefit from major opportunities in an increasingly interconnected world.

English Skills | France, You Are the Weakest Link! 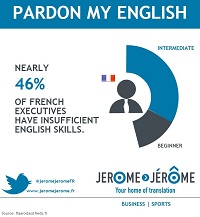 If you plan to enter into the French market, or even if you already have a presence there, you should be prepared to reach your audience in French, in order to increase the impact of your message and improve the efficiency of your cross-border operations.

Indeed, nearly 46% of French executives have insufficient English skills. Further reports confirm the weak linguistic skills of the French workforce and the population as a whole.